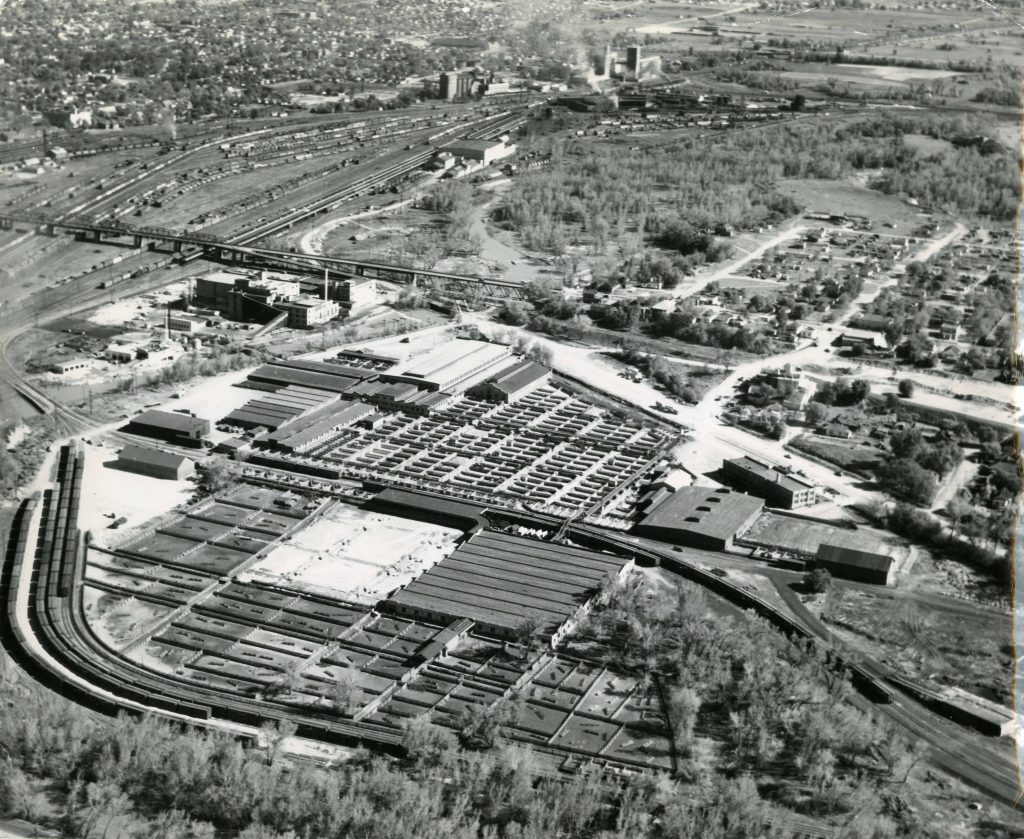 View a gallery of aerial photos showing the stockyards over time. 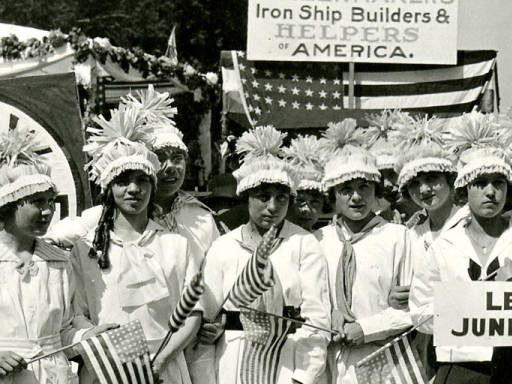 In 1869 the last spike was driven for the Transcontinental Railroad at Promontory, just outside of Corrine, Utah. From that moment, Brigham Young pushed to establish Ogden as the railroad hub for the Intermountain West. Click here to read more.

Check out maps of the Stockyard site. Click here to view. 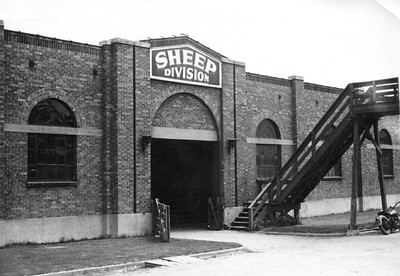 Buildings at the Stockyards

About buildings at the stockyards, including the elegant Exchange Building. Click here for more.

Where the livestock business came together

When someone referred to “The stockyards” in Ogden, they generally meant the whole 70-acre operation where livestock where shipped, sold, slaughtered, dressed and shipped again. The stockyards teemed with activity by related players: individual farmers who may have raised livestock and brought them to market to sell or more often relied on shippers and brokers, truckers who collected animals from the countryside and brought them to market, auctioneers, government inspectors and regulators, cold storage facilities, and the individual members of the Exchange. The Exchange Building rented offices to those doing business in the stockyards, and concessions included a snack bar and general goods store. 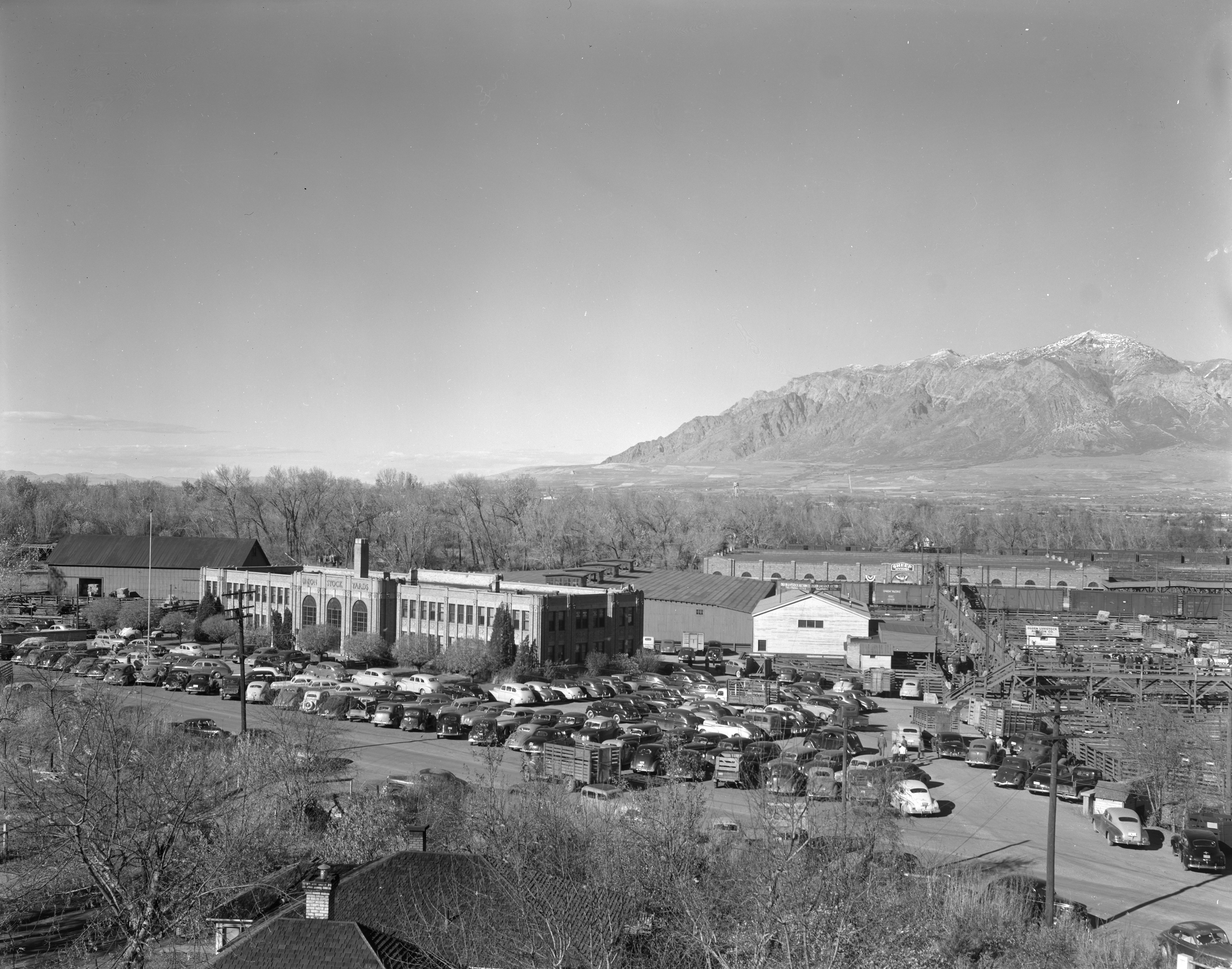 Five operations formed the backbone of commerce at the Ogden Union Stockyards:

Around the country, the livestock business has always followed transportation trends, starting with “the long drive” where cattle were driven from ranches to market or pigs and sheep were brought to market in horse-pulled freight wagons. Then a feeder system of rail lines (with trucks filling rail cars from the countryside) and ultimately semi trucks through the nation’s interstate highway system. When rail no longer became the transportation method of choice, meat packing facilities closed shop on their aging multi-story facilities in favor of sprawling conveyor-fed plants adjacent to feed lots that ensured a more consistent quality of finished meat demanded by modern consumers.  When the meat packing facilities closed, stockyards generally followed within months, spelling the end of an era. 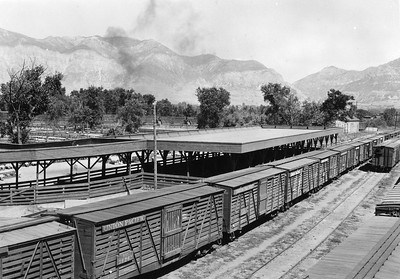 Ogden’s Swift plant was one of the company’s last to close and while officials said that the facility had always been profitable, conditions simply made the change inevitable. Folks have speculated that it would have been too expensive for Swift to retool all of its equipment from galvanized to new stainless steel, but realities of aging facilities built in the old style, the shift to feedlots, and the emergence of interstate trucking instead of rail all spelled demise for Ogden’s stockyard operations. Other Ogden meat packing facilities like Wilson closed around the same time.  About 700 people were still employed in physically demanding but well-paying jobs down there. It was hard work, but oral histories reflect pride in it, and hard times for heads of families that had specialized skills that were no longer needed.

Facilities were abandoned or turned to other uses, but today the stockyard site is emerging as a new business park called the Business Exchange.

The Ogden Union Stockyard Site has a Historic American Landscapes Survey (per the National Park Service). It was commissioned by the City of Ogden and conducted by local landscape architects, IO Design Co.

Click here to read the Ogden Stockyard HALS document and view wonderful drawings of architectural details on the site. Here is one of the images from that survey, along with a historic photo of the concrete loading ramps in use.

This next section directly quotes from national register for historic places application for the exchange building. Click here to read the National Register of Historic Places Registration form for the Exchange Building.

“Located on the bend of the Weber River in Ogden Utah, the Ogden Union Stockyard Exchange Building is located north of Exchange Road within a larger 70-acre parcel of land known as the Ogden Union Stock Yard. The building itself today sits on an independent parcel yet is very much a part of the larger overall area. Once known as the fourth largest stockyard show in the Intermountain West, it was filled with livestock and a bustle of commerce and activity. The overall complex consisted of barns, corrals, a coliseum, rail yards and several other outbuildings. When the stockyards closed on January 29, 1971, the buildings and corals quickly began to deteriorate. Most of the buildings were torn down, succumbed to fire or slowly fell into ruin. Today the site appears as a wasteland of concrete, rubble and remnants of a once thriving facility. The only remaining intact structure is the Exchange Building. However, Ogden City is currently in the process of revitalizing the site to accommodate a business and light industrial park. The overall site will focus on the history of the stockyards and showcase the areas natural amenities. Ogden desires to retain the historic integrity of the Exchange building by keeping it as the showcase of the new development.”

In 1892 a group of ranchers began showing livestock on the property owned by Edmund Robbins, at the bend of the Weber River in the west part of Ogden on a street at the time known as Wilson Lane. In 1916 the property was purchased by a group of investors known as the Ogden Union Stockyards. In 1917, the yards had the capacity for 50 carloads of cattle, 30 carloads of sheep and 30 carloads of hogs.

On January 6, 1920, the first official Ogden Union Stockyard livestock show was held. Although at the time just a few were gathered, this livestock show quickly became one of the most important in the Intermountain West. Thirteen years later The Ogden Standard-Examiner stated, “It has developed into a market of national prominence, and considering what has been accomplished during the last 13 years, its place in the economic program of western expansion during the coming thirteen years should be vastly more important.”6 In 1922 the first exchange building was constructed which stood just east of the current location. No details concerning the style and material of this structure could be found.

In a news article written in the Standard Examiner dated January 2, 1927, it detailed the purpose of the stock show was “…to encourage industry and build a greater city.” It went on to say that Ogden is the railroad center for the Intermountain West and that it is also found in the center of the range land. Finally, many local businesses have invested a large amount in order to create a successful livestock show. The show brought important California buyers and attracted feeding and fattening yards, slaughterhouses and packing plants, all in close proximity to the stockyards and within the Weber County area. The purpose statement for the Ogden Union Stockyards gives a clear definition of why the stockyards were established: “The Ogden livestock show is an educational institution put on by the citizens of Ogden and Weber County to encourage the breeding and feeding of more and better livestock and to more strongly establish Ogden as the livestock center of the west.”7

8 Murphy, Miriam B. “The Rise and Fall of Ogden’s Packing Industry.”

The stockyard saw tremendous success up through the 1960s bringing in $40-$45 million annually.11 However, this soon changed with the establishment of the Interstate highway system and hauling cattle by truck instead of train. Meat packing plants began to move closer to larger feed lots within rural areas and making an inner-city livestock center no longer needed. In the early 1970s the Swift meat-packing plant closed and left the Ogden area, making the Ogden Union Stockyards even less relevant.

On January 29, 1971, the Ogden Union Stock yards closed for good, never to reopen as a stock yard again.12 In the mid-1980s the 1939 annex building, which had been built for junior livestock shows, and later used as a public ice-skating rink, became home to the Wasatch Figure Skating club, and the Exchange Building home to differing offices and uses. The rest of the stock yards fell into disrepair with several outbuildings being demolished.

In 1986 the Exchange Building was completely abandoned and in 1990 the Wasatch Figure Skating Club moved to a new location. In 1993 the coliseum was destroyed by fire and the entire stockyard facility was abandoned. Portions of the property changed hands but the majority of the acreage was owned by Weber County.

In 2014 Ogden City acquired the site and is in the process of creating a business park which captures the history of the stockyards while integrating the natural surroundings.13

Click here to read about rebirth by the river…

Click here to read about the History of Ogden 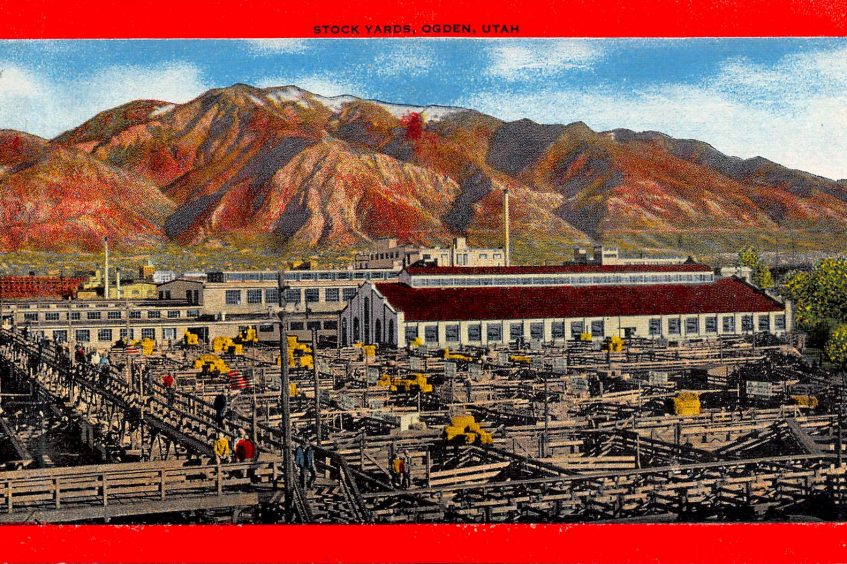